So ends the new TV spot from TBWA LA for Johnson & Johnson, advertising not the company’s baby shampoo or Band-Aids, per se, but the company itself.

Johnson & Johnson today introduced its first corporate-branding campaign in a decade at its annual shareholder meeting in New Brunswick, NJ. The TV ads will begin airing on May 6, and a print ad will run in The New York Times and People on May 10.

This comes after a tough several years for the company, which has dealt with multiple product recalls and lawsuits.

“One of the things that we wanted to be sure to do is move to really get past some of the challenges we’ve had as a business,” said Michael Sneed, VP of global corporate affairs.  “We’ve made great strides in that and we want to make sure we have a full conversation about who J&J is. We’re not perfect but we want people to understand that when we do make mistakes, we own up to those mistakes and we want people to understand the values that are behind J&J.”

J&J ranked No. 6 of America’s 150 most reputable companies this year, dropping from No. 3 last year, according to The Reputation Institute.

“We certainly are not oblivious to the rankings,” Sneed said. “The reputation of J&J is very important to us. We take it very seriously. We have a lot of data that we look at, both externally and internally,” he said. “I wouldn’t say there was any one thing that precipitated [the campaign], and we certainly don’t do these things just for rankings. Reputation is something that’s born out of actions. The reputation is a reflection of people’s perspective on the actions that we do take.” 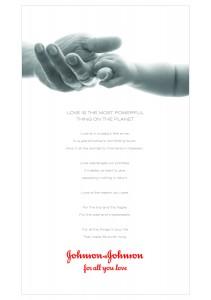 The corporate campaign is the first global one, will continue indefinitely and will cost an estimated $20 million to $30 million for the remainder of the year.

It comes at a time when many businesses such as Nestle, Unilever UN +% and Procter & Gamble PG -0.57% recognize the value of corporate branding in an increasingly transparent and accessible world driven by social media. “We’ve really embraced transparency because we think we’ve got a great story to tell,” Sneed said. “It has made us even more committed to making sure that we’re part of the conversation wherever that conversation happens. Clearly, more of that conversation happens online and in the digital space. We love that things happen in real time. We get jazzed at being part of that,” he said, adding that employees, particularly the younger ones, are excited by the company’s involvement in social media, and “have become ambassadors for the brand.”

Sneed also pointed out that J&J has a history of doing corporate campaigns–for example, the Campaign for Nursing’s Future, which has been running for 10 years.

“As we were thinking about what else we wanted to do, we thought it was important to reconnect with customers, healthcare professionals, and reconnect them to J&J and really [help them] understand the values behind J&J. The campaign is about celebrating the people who do the work of caring for others and in a selfless manner.”

The central theme of the new ads, the first from TBWA LA, is love–“an expression of what people do when they care unconditionally for others,” Sneed said. “That comes out of the history of J&J.”

Watch one of the spots here: